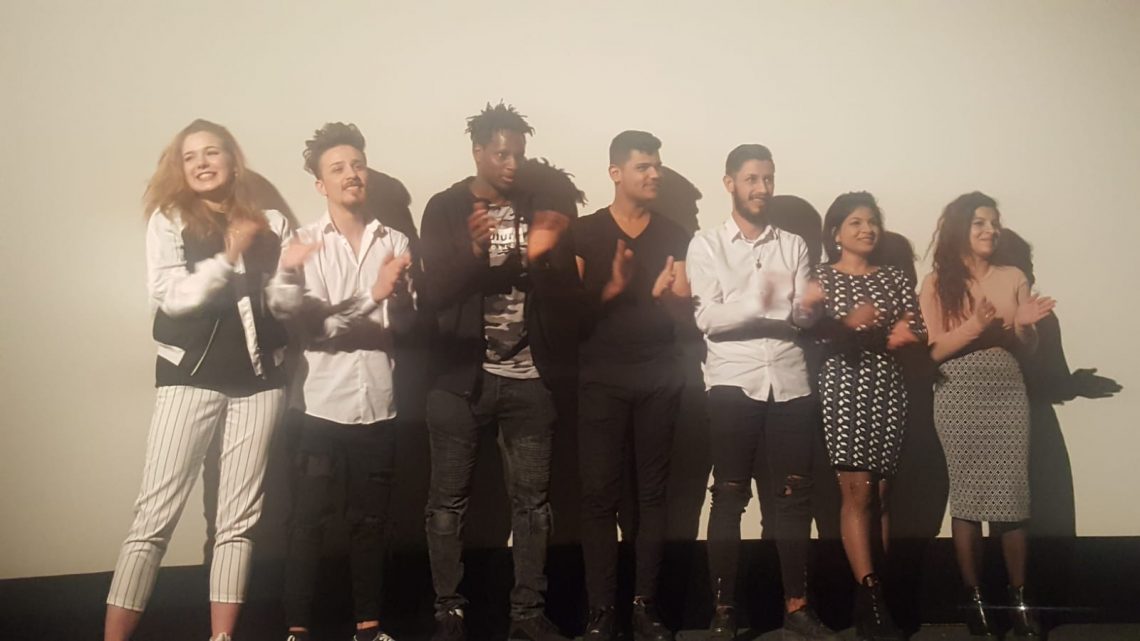 On Tuesday, 9 April, our film “Too late” premiered at 6 p.m. in the METROPOL cinema in Düsseldorf. It is a fictional film of 45 minutes in length, which was made last autumn as part of a youth project. It deals with two of the oldest themes in the world that have always occupied young people a lot: love and friendship.

The story focuses on Ali and Orhan, two best friends who, amongst other things, have in common that they are practically always and everywhere too late. Tamara, Orhan’s girlfriend, feels badly treated by Orhan, while Ali wants a girl like her to be his girlfriend and can’t think of anything more wonderful than being together with his dream girl. The names of these characters already show that the characters are people with a migration background. In fact, the ensemble is extended to include Mamadou and Qaidar as well as others who were not born in Germany, but who have found their second home here. Accordingly, the participation in the project was a double challenge for the young people, since in addition to an acting performance, a linguistic hurdle was added.

The only exception in the team was the twenty-year-old Daria Apostol, who is a native German speaker and already had previous acting experience.

“I have stood on stage for many years as part of an acting group and have also repeatedly appeared in small film projects, however this was a significantly larger project with a greater workload. But it was worth the effort and I am very satisfied with my role. I play an almost archetypal white, blonde German girl with an open-minded attitude and a dark-skinned friend. This makes me the only character in the film with German roots, since the remaining characters in the film are young refugees and migrants.”

The leading role in the film was played by seventeen-year-old Ali Galiqi, who came to Germany with his family a few years ago from Albania and who had clearly accepted the challenge of acting.^

“I was full of energy during the whole shooting and could hardly wait to step in front of the camera again. Although I was sick for a few days during the shooting, all I could think about was when my next scene was going to be and when I was allowed to play again. Although it was all a lot of work and at times it wasn’t easy for me to remember my script, it was an unforgettable experience and I would do it again anytime”.

The film was produced by AVP with the support of the Landschaftsverband Rheinland. Originally it was planned to give the themes of integration and fleeing an even bigger role in the story, but in the final film they simply serve as the background to the film. The focus lies on the daily tragedy and comedy in the life of a young man who is torn in between love and friendship has a problem with punctuality.

This is due to the fact that the idea for the film came from the young people involved in the production. Although some of them have migration backgrounds and flight experiences and some do not even know whether they are allowed to stay in Germany in the future, their interests do not differ from those of most other adolescents in Germany or anywhere else in the world. Just like them, they are also mostly interested in topics such as love and friendship.